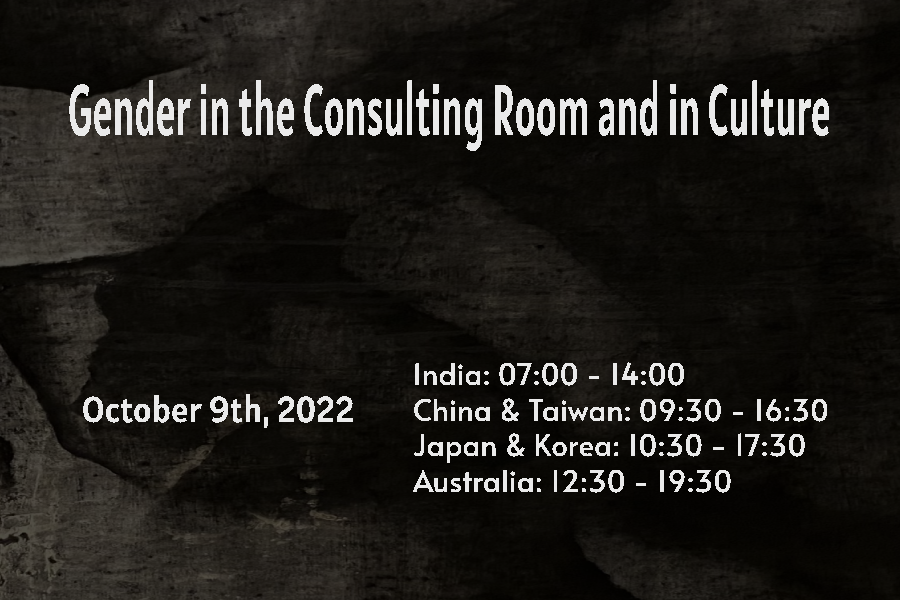 Gender in the Consulting Room and in Culture

conference
2022-08-29 ~ 2022-10-01 Open for registration
The conference features three individual
paper presentations in the first part of the day and small
clinical discussion groups in the second part of the day.

There will be an hour break between the two three-hours sessions.

Dr. Takashi Okudera (Japan Psychoanalytic Society)
Title: Transference in the Gender and Cultural Context:
The Various Aspects of the Positive

There will be 6 groups. Each group will have a member or candidate presenting
clinical material and two moderators facilitating the discussion.


50 USD for members and 30 USD for candidates

Dr. Takashi Okudera is a psychiatrist, and a full member of Japan Psychoanalytic Society.
During teaching, practicing and studying at Gunma University, Faculty of Medicine in Japan, he had been an international fellow at the Menninger school of psychiatry, learning the psychodynamic psychiatry and a honorary associate at the adult department of Tavistock and Portman NHS Trust, trained for psychoanalytic psychotherapy.  Regarding psychoanalytic training, he started it at the Institute of Psychoanalysis in London, then transferred to Tokyo branch of the Institute of Japan Psychoanalytic Society.  His special interests are, on the treatment of Trauma, the theory and techniques of British Independent School.  Now he is running his private practice in Tokyo, teaching at Japan psychoanalytic society and other organizations.

Jhuma Basak is a Training & Supervising Psychoanalyst of the Indian Psychoanalytical Society, and Ph.D in Psychology from the Kyushu University, Fukuoka, Japan.
Basak pursued her interest in psychoanalysis with specific emphasis in culture, women, & gender. She has international publications in journals & books translated into different languages like Japanese, Italian, French & so on, along with papers presented at various international IPA Congresses over the last 20yrs. She is the co-editor of the book, Psychoanalytic & Socio-Cultural Perspectives on Women in India, Pub. Taylor & Francis Group.
Basak has been the past Co-Chair of Asia COWAP-IPA (committee on women & psychoanalysis, 2017-2021), and organized the first 2-COWAP international conferences in Kolkata, India, in 2018 & 2019. Currently she is the Co-Chair, of Allied Centres of the Independent New Groups (ING of IPA), and member at the IPSO & IPA Relations Committee (IIRC).
Basak offers lectures in Psychoanalysis and Psychology in different universities of India, and conducts workshops with NGOs and at other social platforms.
She has her own private clinical practice in Kolkata, and is associated with a private hospital & clinic in Kolkata. She is the Founder of Mira Centre for Innovation, working on mental health, arts, & education.

Before working as a psychoanalyst, Dr. Fan was a schoolteacher.  Like Susan Isaacs, who trained at Darlington Teacher Training College, and was the principal of Malting House School (1924-1929), Dr. Fan is fascinated by how children think and behave.  She observed children in her classes and playground, was inspired by them and published stories and poems for them.   She moved onto studying psychology to explore children’s mind further.
After obtained her master’s degree in educational psychology, and became a Ph.D. candidate in the field of counselling psychology at the National Taiwan Normal University, Dr. Fan went to study psychoanalysis in London in 2001, and lived there for 15 years.   During her life in London, Dr. Fan completed the course of Psychoanalytic Observational Studies in 2004 (Tavistock & UEL, Master of Art), trained at the Tavistock and qualified as a Child and Adolescent Psychoanalytic Psychotherapist in 2008, and finished her Adult Psychoanalytic Training in 2013 at the Institute of Psychoanlaysis in London.   In 2014, she completed her doctoral thesis, became a professional doctor in Child Psychotherapy (Tavistock & UEL).   In 2020, she was elected to Fellowship of the British Psychoanalytic Society.   Apart from publishing her own papers, Dr. Fan also has translated and co-translated more than a dozen psychoanalytic books into Mandarin Chinese, including Closely Observed Infants, Impasse and Interpretation.
Before Dr. Fan moved back to Taiwan in 2016 and joined Taiwan Study Group, she was teaching psychoanalytic theories and infant observation at Anna Freud Centre, UCL, and was working privately as a child psychotherapist and adult psychoanalyst.    Now in Taipei, Dr. Fan is in full time private practice, seeing adults and children, as well as teaching and supervising.

Soh Agatsuma, M.D., Ph.D. is a full member of IPA and Japan Psychoanalytic Society (JPS). He is a Professor of Psychiatry and Clinical Psychology at Sophia University in Tokyo. He completed his analytic training at the William Alanson White Institute in New York, and returned to Japan in 2009. He is now in private practice both in Tokyo and near Osaka. He is a member of the Executive Committee of JPS and is the Chair of the Public Relation Committee. He is on the IPA Inter-Regional Encyclopedic Dictionary of Psychoanalysis (IRED) Committee. He is IJP Associate Book Review Editor for Japanese language contributions to the psychoanalytic literature.

Naoki Fujiyama, MD. is a training analyst and President of the Japan Psychoanalytic Society. He is a member of the Progamme Committee for IPA Asia-Pacific Conference 2023 (India). He is the Chairman of The Kodera Foundation for Pyschoanalytic Studies and Professor Emeritus of Sophia Univerisity, He authored more than ten boolks on psychoanalysis in Japanese. He has a private practice in Tokyo.
Liling Lin

Liling Lin completed her psychoanalytic training in New York and currently is a member of Taiwan Study Group, where she serves on its training committee. She also serves as the acting president of Taiwan Center for The Development of Psychoanalysis. She has presented and discussed at various psychoanalytic conferences, including the Asia-Pacific Conference in Taipei (2017) and in Tokyo (2018). She has a private practice in Taipei City.

Tsung-Wei Hsu is a psychoanalyst and a child and adolescent psychiatrist, and a member of Taiwan Study Group. She was trained in Psychodynamic Psychotherapy for Child and Adolescent Psychiatrists at the Tavistock and Portman NHS Foundation Trust, U.K. She is a Consultant child and adolescent psychiatrist at China Medical Hospital, Taiwan, and the secretary-general of Taiwan Association of Child and Adolescent Psychotherapy which she co-founded in 2020. She mainly works in private practice.
Vinita Kshetrapal, Ph.D.

Nilofer Kaul is a Delhi based Training and Supervising analyst. She won the Frances Tustin Prize for the best paper on autism in 2018 and the Roszika Parker Prize in 2021. She has published Plato’s Ghost on liminality and minus links in psychoanalysis (Phoenix Press, 2021). Her monograph Consent: Fearful Asymmetry is forthcoming with Zubaan books.
Hongsuk Jang, M.D.

Ph.D. is an interim supervising analyst in private practice in Seoul. He is a member of Korean Institute for Psychoanalysis - the provisional society of IPA. He was mainly trained in Korea and had experienced the one-year candidate exchange program with the San Diego Psychoanalytic Society and Institute. These experiences set the theoretical orientation towards the contemporary American Ego Psychology mingled with Korean cultural background. After the graduation, his theoretical interests widened towards the earliest development of the human mind, which necessitated the deeper study of the contemporary Kleinians, the Bionians, and especially the Winnicottians. His life-long focus of the psychoanalytic interest is the understanding of the nature of blocking of free flow among the parts of the mind and the methods to facilitate or enhance the free and comfortable accesses among the parts of the mind within oneself. The current specific theme that he is preoccupied with is on the earlier stage ego development and the establishment of background safety for the later healthy developments.

I completed my psychoanalytic training in Korea and currently am a member of the Korean Institute for Psychoanalysis(the provisional society of IPA). Since 2018, I have been in private clinical practice in Changwon, located in the southern area of Korea and Currently working as a chief of candidate’s progression committee in KIPSA(Korean Institute for Psychoanalysis). My interest is finding and enjoying psychoanalytic ideas and values in everyday life.
LEONIE SULLIVAN

Leonie Sullivan is a training and supervising psychoanalyst and psychoanalytic psychotherapist in Sydney Australia. She has taught in China since 2008 and at the Wuhan Hospital for Psychotherapy and Wuhan Mental Health Center affiliated with Tongji Medical School, (Huazhong University of Science and Technology). The first, second, third and fourth of the three-year psychotherapy training programs. have involved teaching in the experiential group training and lecturing in the application of Bion’s ideas to individual and group work.
Her interest is in the application of psychoanalytic thinking to a variety of settings such as the use of groups in mental health as well as to mother infant work. Recent invited discussion publication:   Is Psychoanalysis a Science or an Art. January 2020. Conference presentations at each of the IPA in Asia conferences since 2010.

She has been in private practice since 1985. Currently working as a training and supervising psychoanalyst, Balint Group, and Infant Observation and Weaving Thoughts seminar leader, in Australia and internationally. Professional membership include, the International Psychoanalytical Society and the Australian Psychoanalytical Society. the Psychoanalytic Psychotherapist Association of Australia. She is an accredited Balint Leader and educator and a foundation member of both the Chinese and Australian and New Zealand Balint Societies. She is registered with British Psychoanalytic Council (Dynamic Interpersonal Therapy). She is also an accredited mental health social worker with over 40 years experience in the field of mental health. Originally gained at a large teaching hospital in Sydney where she worked in the inpatient and liaison psychiatry department conjointly with the University of NSW. Currently working as an ongoing group consultant to this hospital.